Best Location (or Capture Points) of the Port Spanning

Good morning! FYI - I am new in Dynatrace DCRUM and currently doing POC assessment. Managed to install the Network Vantage 10 and CAS 12.3 whereby able to collect the target reports (this are the traffic coming in and out from the remote users). However, we have found out that within the data center there were users residing in the LAN and have no port spanning to it.

Basically, we have done the port spanning to the WAN link interface in the switch.

Question 1: If we put the port span in the server side, it this a good idea?

Question 2: Currently, there are a port span in the WAN link and if we port span the server farm, is there any duplication of traffic statistic to be measured as double? Or any duplicate flows will only accept one valid flow and refuse the other. 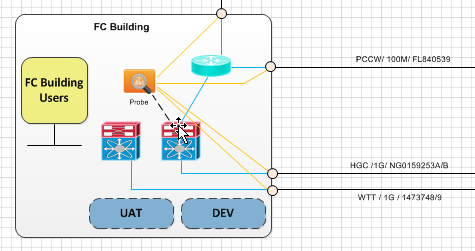 FYI, DCRUM 12.3 is nearly end of support, and NV has been end of life for a long time now.

To your questions though.

For DCRUM, ideally you monitor your servers directly, in the case of the above diagram, you'd SPAN your server VLAN(s) to the AMD/probe, this way you get your local users and your WAN users in one place.

The AMD de-duplicates traffic, so there should be no doubling-up of traffic. The AMD uses the certain fields in the IP packets to determine if a packet is a duplicate or not, this is configurable (see: https://community.dynatrace.com/community/display/DCRUM124/Global+-+General). There's some cases where deduplication can't be done - for example the AMD has a limited buffer for seeing the duplicates.

In your case it may be better to not span the WAN connections if you have all the servers covered with a SPAN.