Has anyone come across this?

I am running DNA 12.4 on my laptop. Upon install I had the SQL server, which came with DNA, installed locally on my PC. The past few days I have been working on numerous captures, manipulating them, copying them, etc. During this time I have had my usual 12-15 other applications open on my laptop. The past few days Windows 8 has warned me it was running out of memory, and requesting closing down IE, Firefox, Outlook, and many other applications. Typically a different application each time the warning appeared.

Today I decided to run Task Manager and found that sqlservr.exe was using Memory (private working set) of ~1,600,000 KB. It was by far the largest application in memory. The next largest was ~250,000 KB. I noticed that when I closed the captures in DNA the memory was reduced a few KB. I assumed DNA would release the 1.6 GB chunk of memory once it was closed. Wrong! Once again, only sqlservr.exe was reduced by a few KB.

Note: I wonder if this is the same reason TTA 12.x would hang. But I never received memory errors from Windows 8, or checked with Task Manager.

Also, if I end the sqlservr.exe task to release the memory, I am unable to run DNA without rebooting my laptop.

What you are seeing is the nature of SQL server? SQL server will draw data into its cache and keep it there and really does not like to give it up once it has it. You could restart the SQL server service and it will clear, and you may want to adjust the max server memory setting in sql to limit sqls ability to eat up

Dynatrace Community
to the rescue! Hopefully 😉

Which SQL
Server version are you using? (Release, Express/Paid) Newer versions of the
engine may employ smarter memory management mechanisms (SQL Server 2012 SP3 is
recommended for the current DNA release.)

You can
manually set a maximum Server memory you want to allow – the setting is
available via SQL Server Management Studio under Server Properties > Memory
(see screenshot). 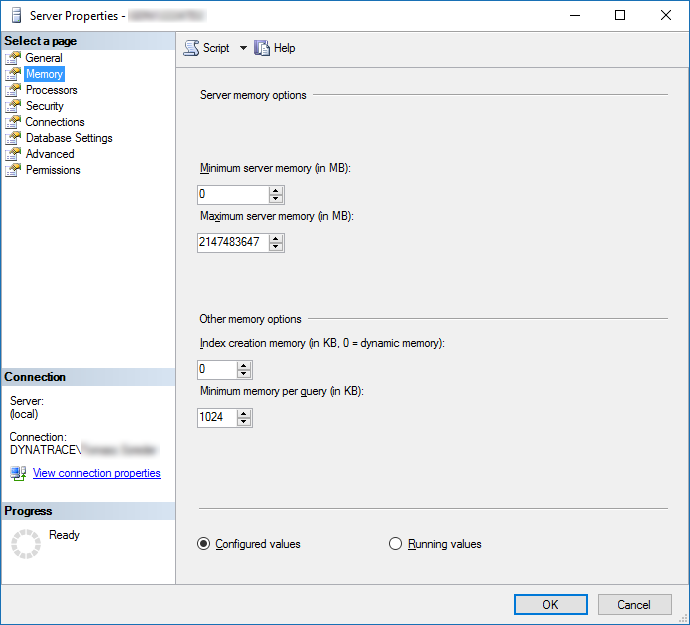 As Brian
mentioned, for a quick effect you can also restart SQL Server instance. This
you can do with SQL Server Configuration Manager.

There is a
great article on SQL Server memory management myths – may be a little dated,
but is worth a read: http://sqlmag.com/sql-server/memory-myths.

Alternatively,
you may always consider enhancing your memory: http://lifehacker.com/top-10-tricks-to-boost-your-memory-and-remember-anythin-1748770380.

I didn't forget about this thread. Just busy with other matters.

I am using a Services shortcut to Stop/Start SLQSERVR.EXE when I exit DNA. So far it works for most traces. However, when I open a large traces with hundereds of thousands of frames, Windows alerts me to DNA and/or other programs needing to be shut down because of memory.

When the dust clears on these other issues, including uninstalling/reinstalling DNA to clear other issues (see numerous threads from me) I will check the resources and information you included in your responses.

No problem, take your time. The problems sound scary though, how much RAM do you have in your machine? I don't think I ever saw such a message, and many of our test environments barely meet a minimum required memory of 3-4 GB.