My client has asked me a question of which I don't know how to answer:

"We have a tap between a server
and client.

Why would the number between the
(Server to AMD) and the (AMD to Client) not be the same?

If anything, Server to Client
should be higher?"

I don't understand where the AMD fits in this equation. Can someone help clarify?

The number
packets sent by a server that were lost - between the server and the AMD - and
needed to be retransmitted.

The number of
packets sent by a server that were lost - between the AMD and the client - and
needed to be retransmitted. 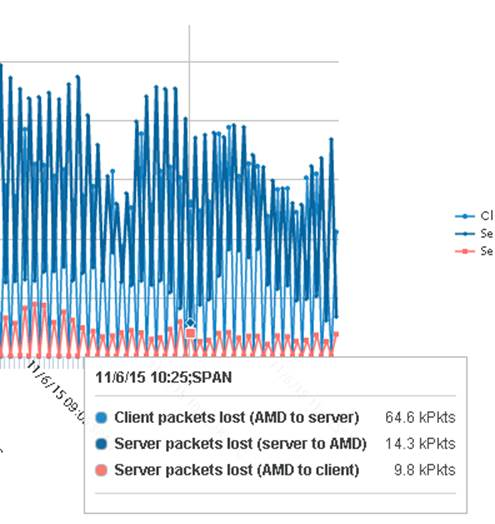 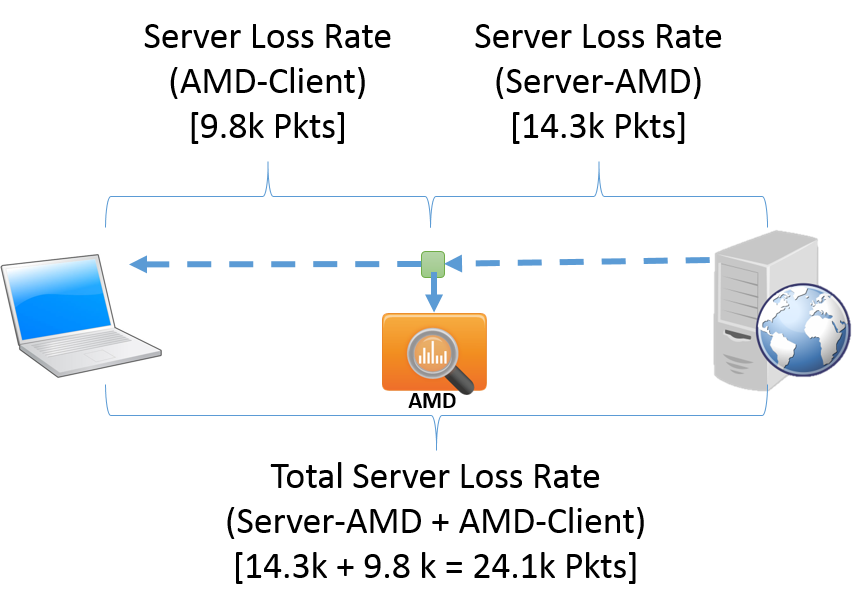 This is possible, as the AMD is in the middle, so it can see what packets got to it's sniffing point in the first transmission, vs what the client ends up requesting as retransmissions. then it can take the differences to figure out the two values.

This is useful, as it now tells us where the majority of the loss rate is taking place. Assuming we know the position of the AMD sniffing point on the network, using your datapoint, we can safely assume that the majority (14.3k Pkts) of the total Server-side loss rate (14.3k + 9.8k = 24.1k Pkts) is due to something on the network between the Server and the AMD sniffing point.

IT's just another way for us to break down the communication between server and client a bit more, due to the positioning of our AMD.

Just verified this by adding the three Server Loss Rate metrics in a DMI report:

Hey Brett - Did you digest Matt's excellent description?
If not - let me try to put it in terms the customer might understand:

"We have a tap between a server and client. (Very good)

Why would the number between the (Server to AMD) and the (AMD to Client) not be the same?

Simply because it´s different traffic - The packets can be lost before the AMD as well as after. We know the total number of lost packets and we know the number of packets that has past the TAP/AMD - also what packets (ACK and retrans). The difference between those 2 is what is lost between the server and the AMD. The decode keeps track of the sequence numbers and so knows when a packets have gone missing.

If anything, Server to Client should be higher?" Why - packets can be lost in both directions?

BTW - you graph is missing "Client to AMD" to make the picture complete.

Thank you for your detailed response. Yes, those 6 perspectives all make sense and do paint a great picture of where the loss is happening. These metrics are much more useful than I imagined 🙂

I have some sample capture files available from a customer who has multiple capture points and AMDs in their environment. Some application flows happen to pass more than 1 of these capturing points, so I had the chance to capture traffic simultaneaously on both ends of the network loss. The actual loss is happening on a switch in between the 2 capture points.

There's 1 trace file where a server packet is lost, and in the other file (capture point closest to the server) this packet is still there.

These two samples can help you interpret how a tool like wireshark reacts to both situations, as it uses different colorings for the retransmitted packets.