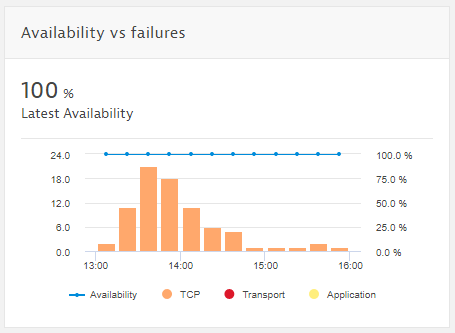 You can use the Error explorer to break out the TCP failures into the different types. Each type of error typically has it's own set of possible causes. For example:

* Connection establishment timeout: The client tried to establish a connection, but the target server never responded. This could be because the server is powered off, there isn't a server at all using the requested IP address, a routing issue is preventing the client from reaching the server, or a firewall is silently dropping the connection attempt.

* Connection refused: The client tried to establish a connection, but the server refused to accept it. This may mean that the server is on, but there isn't a process listening on the port. Or it could be because the client has tried the wrong port, the server's application process isn't running or has used up all its connections. Finally, firewalls may actively reject connections instead of silently dropping them.

* Server not responding: An already-established connection has been ended by the client (using a TCP reset packet), because the server has been idle and not responding.

* Client not responding: Likewise An already-established connection has been ended by the server (using a TCP reset packet, because the client has been idle and not responding.

*Server session termination errors: The server's decided to terminate the connection unexpectedly. Maybe the server's detected a security problem with the connection and closed it for safety, or the server is rebooting. This category isn't necessarily an issue - some programs may be coded to reset a connection.

This definitely isn't an exhaustive list of all the possible reasons for the types of errors, but it's a good start when diagnosing a problem with a software service.

Thank you for the descriptions of the potential TCP failures.

I apologize for my poor understanding before asking the same question once again with a bit more elaboration to take the benefits of your experience.

The following screenshot is taken for one of the software services to show you the metrics information. As you can see, that operation response time exceeded at a particular time, and at the same time, there were several TCP failures.

It is filtered out only on one software service, but while taking the screenshot, I removed the additional area and kept only the relevant ones.

Which means increase in Operation time and increased number of failures concerns your single, selected software service only.

TBH, I'm not sure what you mean by "clients failed to make the TCP sessions because of the software service ".

I apologize in case my query was not clear or complicated.

What I learn from your comments, that the TCP failures will be associated with the selected/filtered software service, either way, whether these are due to something wrong on the client side who is accessing the service on a particular port or there is an issue on the software service itself.