Are security team is using TCP Sequence Number Randomization on our firewall. 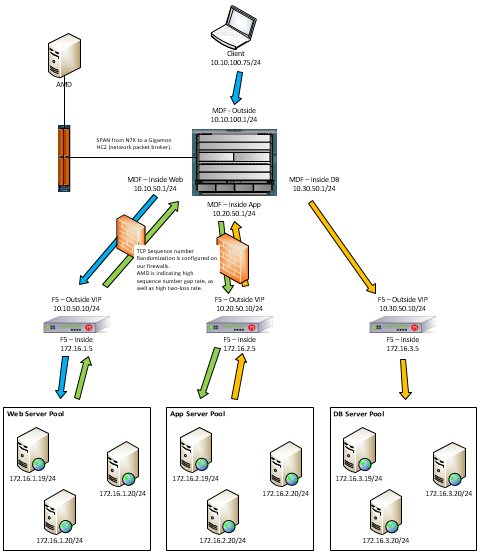 Because of this, we are experiencing high sequence number gap and two-way loss rates. Anyone with a similar setup? How did you resolve your monitoring issues?

If both streams need to be analyzed the 2 AMDs are required.

In addition to what John said, I can add that sequence randomization alone shouldn't be a problem for the AMD. If AMD does receive packets from both sides, as John suspects, this needs to be corrected first. If this is not the case, then it would be a subject for a Support call - lab will have to analyze packet traces from the AMD to find out exactly what's going on.

Apologies that the diagram wasn't clearer. I am capturing packets from both sides of both firewalls. Actually, there are over 200 firewalls in our network. This is only one application.

I don't follow. In the traffic diagnostics I am seeing between 17% and 49% two-way loss, and between 3% and 15% sequence number gap rates. We have worked with Cisco to fix any SPAN issues. We have worked with Gigamon to fix any packet broker issues. In fact, Gigamon was the vendor who explained the TCP sequence number randomization issue (see attachment - extrahop-tool-reporting-tcp-bytes-missing-from-tcp.docx).

This is just one more time where security enables so much defense in depth (mutliple FW's, F5's, SNAT, TCP sequence number randomization, etc., etc.) that it becomes impossible to monitor the applications on the network. 😞

I'm open to any other suggestions the community may have.