Announcing the Community Member of the Month for July 2020! 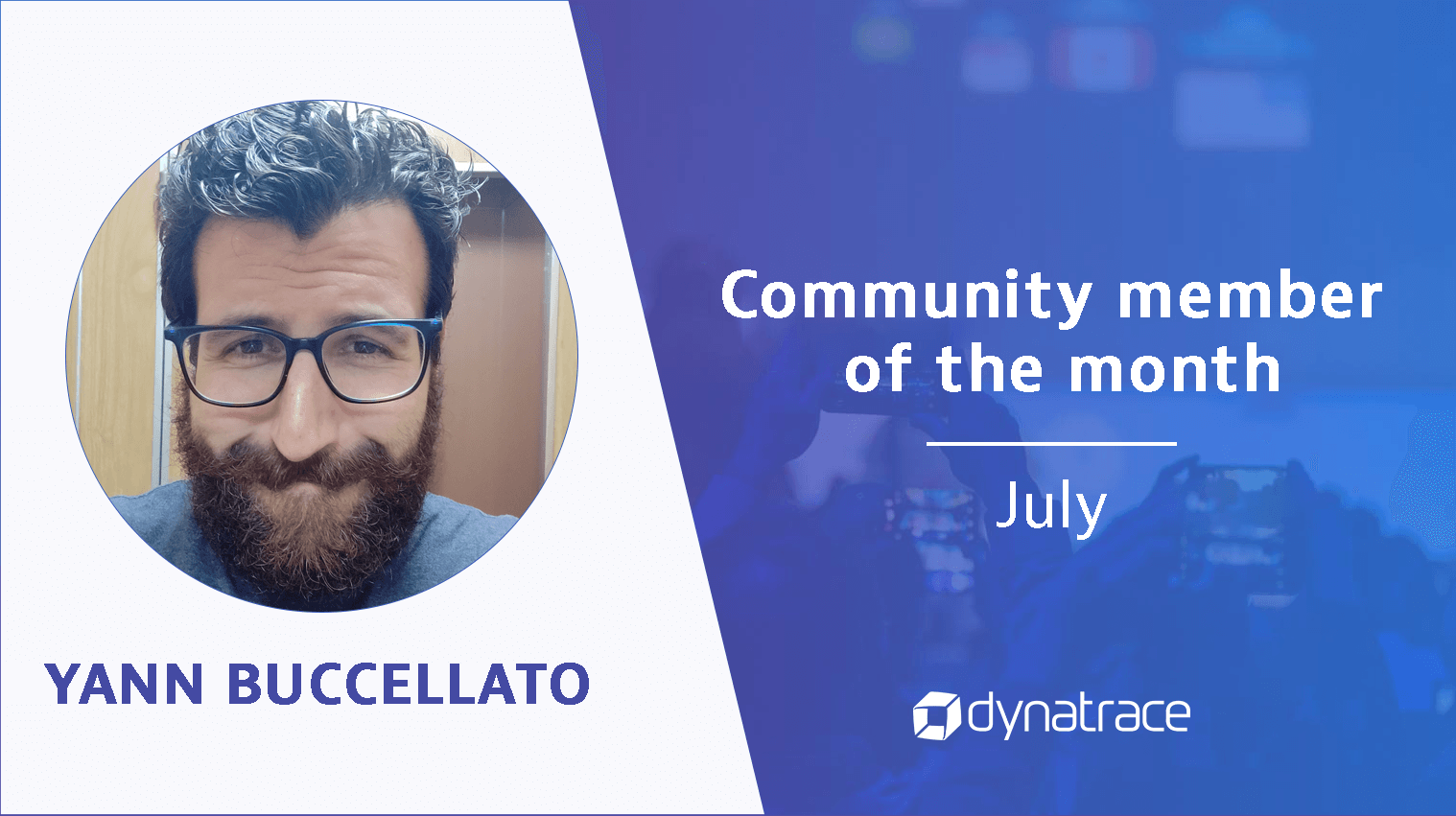 Our Community Member of the Month for July with his positive attitude is making our forum a better place. Thanking every time for the answers to his questions and giving out the reputation points for the help are great examples how people can feel appreciated for sharing their knowledge. This attitude is something we want to promote, so our choice of the winner this month was very easy. Let's hear from Yann!

Can you tell a little bit about your professional life? Where do you work and what do you do in your job?

As a freshman with basic knowledge of Networking concepts and protocols (self-learned from CISCO) I started working in the IT-monitoring field in 2016 for an Italian public health insurance institution: INAIL. I started as a first level Operator in INAIL's Service Control Room, located in Rome (Italy), and worked with a wide variety of monitoring tools (Tivoli, Nagios, private vendor APM and infrastructure monitoring solutions - you named it, we had it!)

I have always been a really hungry-for-knowledge person and this way of being gave me the force to investigate and learn on the field what I was missing in the time of need (It goes without saying: "not without struggle"). Management & Consulting, the actual company I work with, rewarded my efforts by enrolling me in the monitoring-dedicated sysadmin team in 2017.

Since then I have helped the organization in troubleshooting major incident, configuring specific use monitoring case and in general I deep-dived in many availability and performance issues in order to get to the root causes of problems. Part of my time on the job is also spent on dedicated training sessions to people who are new to the project and I'm currently spreading a lot of Dynatrace culture around.

With time passing by and the growth and differentiation of adopted technologies managing all those monitoring tools had become overwhelming and sometime even counterproductive.

We needed the one-tool-solution, we needed Dynatrace.

What is your story with Dynatrace? Why did you start using our products and for what project?

The first time I heard of Dynatrace it was while spectating a proof of concept meeting in 2018 but my organization didn't go for it till 2019 when two big and different concurrent projects came in:

First one was about monitoring the new Openshift platform for INAIL which we already tried to do with a previous generation APM tool; the other was about having the full-stack monitoring of a completely new hosted infrastructure from another public institution(and that had to be done in an operative window of 2h).

After installing all the Dynatrace node we needed (with the support of Dynatrace staff on site) we quickly provided the Full-Stack monitoring of the Openshift platform via DaemonSet and, after a while, with a little bit of work, we also delivered the monitoring for that other project by installing the OneAgent via Ansible.

During this time, I earned my Dynatrace associate certification at the Barcelona Perform event and I trained other two people for the same certification. Now we are in the process of migrating all the old-generation APM monitors to our managed Dynatrace. 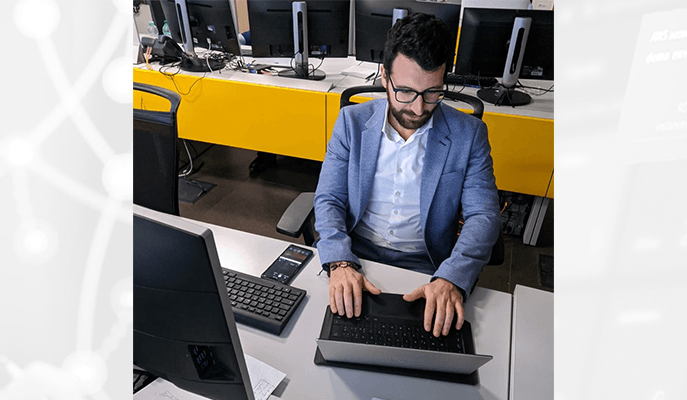 Have you ever had any interesting use case for Dynatrace product that you found out to be particularly intriguing? Could you tell us about it?

In the past months, at the start of Covid-19 quarantine, I was asked from INAIL to create a business dashboard that would represent the workers' end user experience while working on the public institution's core-applications and in smart working mode. Also, I would have to distinguish the VPN workers and the VDI one from those who were still working sporadically from the usual place of work.

Dynatrace offered me many different way to make those kind of distinction; I simply decided that I could ask to the Network team for an excel sheet containing all those mapped IP addresses and could later upload the equivalent .csv in my Dynatrace Managed with the "Map IP addresses to locations" function. By doing so the rest of the work was only about making the right USQL and to put it in a valuable dashboard.

The work was really appreciated and, as many realized the value of the fine detailed data we were looking at, the management soon asked me to cooperate with other teams in order to provide an integration between the data on Dynatrace and the Power Bi Microsoft tool. This was done pretty easily since the Dynatrace API interface help you translate the same USQL I was using in dashboard in an old fashion API call that could have later been used in a Power Query inside Power Bi.

It was an important work for the entire organization but I also felt rewarded all along the work because I got in touch with many different actors and I learned, aside from the technical subjects that are always around the corner, useful practice and relations from and between different groups of work that I could have never imagined before.

What brought you to our community? What is your best memory about it?

Later on, I discovered the Product Ideas section: a real golden pot! In that framework I tried to gave my contribution by supporting Trevor M.'s idea (https://answers.dynatrace.com/spaces/483/dynatrace-product-ideas/idea/216173/rfe-process-health-tile...) by giving a better insight of what could be done to add more value to processes in need of being pictured in Dashboard.

And how about your life outside the IT – what is your biggest passion?

I usually try to move a lot mostly free body workout; as they teach you in the old Latin: "Mens sana in corpore sano" meaning that it's good to have a balance between Mind and Body health.

I also care about music: in my spare time I always take great pleasure in playing the acoustic guitar; I play and learn new song in order to enjoy great musical dinners with friends at my house where we can all laugh and sing.

For the summer I'm travelling in Germany; I have planned some visits here and there and I really want to learn some german too! What better way to learn it if not by being there? I really feel exited!

It would also be great if you could share with us your favorite movie, song and/or a book. Let other Community members discover something new and interesting to watch/hear/read 🙂

I am really fond of a movie from Ken Loach: "Land and Freedom" every time I see it, it gives me chill and I still don't understand why. Another one that stayed forever in my memories is "Casablanca"; as they often say: "Old but Gold"!

On the music topic I really love all of it from classical to pop but if I need to share some of my taste I will choose two songs one for my Italian half the other for my French half:

I'm currently reading two very different book: one is actually the "UNIX and Linux System Administration Handbook" that I'm reading to enrich my technical skills; the other is a very detailed tourist guide of the eternal city of Rome!

Thank you so much for this interview! And of course, for being here. Hope you will have a wonderful time in Germany and many opportunities to test your language skills.